This script worked wonders for me in Adobe Illustrator CS to open multi page pdfs in Illustrator with each page of the pdf ending up on it’s own artboard. I’ve also tested it and it works well on Illustrator CC to import multiple pages from a pdf into Illustrator as well.

Here’s how to use the script to open all the pages of your pdf.

The result in Illustrator is a single file with artboards for each imported page of the pdf document.

When you upgrade your version of Illustrator by downloading the latest version from Adobe you might notice the script missing. You’ll need to go to your applications folder and move (or copy) the script file to the same “Scripts” folder. 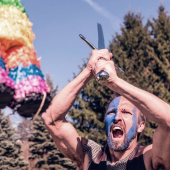 Describing the difference between your available options. Here to help you where I can with your WordPress and digital problems.